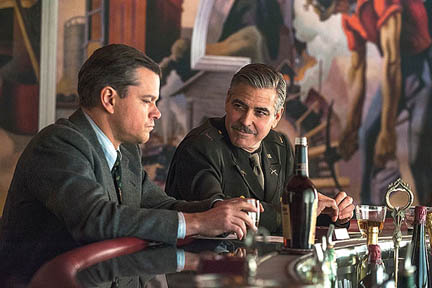 "You can wipe out a generation of people. You can burn their homes to the ground, and somehow they’ll still come back. But if you destroy their achievements and their history, then it’s like they never existed."

So said George Stout, conservator and museum director, who helped start the real-life Monuments Men upon which the movie by the same name is based.  George Clooney stars in,

produces and directs the movie and plays Stout. Reviews of the movie have not been kind, but it has brought attention to the real life heroes who worked tirelessly to restore and return art stolen by the Nazis in World War II.
Stout was one of the 350 or so men and women from 13 countries who served from 1943 to 1951 in the Monuments, Fine Arts & Archives section of the Western Allied military effort and were nicknamed the Monuments Men.  They were originally charged with protecting churches, museums and 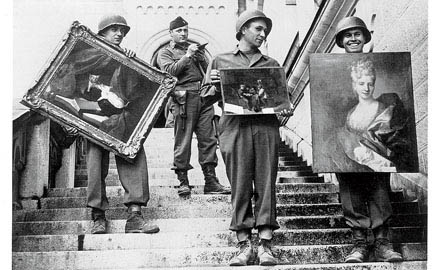 monuments, but later shifted to recovering art and artifacts.  By 1951, they had recovered or restored nearly five million pieces of art including works by Claude Monet, Edgar Degas and Pablo Picasso and works such as da Vinci’s The Last Supper, Michelangelo’s David and Madonna and Child.

Since ancient times, there have always been the “spoils of war”, but the Nazis plundered churches, museums and private Jewish collections on a scale like no one had ever seen or are likely to see again.  They hid artwork in caves, bank vaults, castles and even in the salt mines – places they thought would be safe during the fighting. Finding these hiding places was only part of the challenge – in the salt mines hundreds of feet below ground, Harry Ettlinger’s job was to sift through 40,000 cases of artworks and bring the cases to the surface. In a castle in Neuschwanstein, Deputy Director Charles Parkhurst said it took a year and forty-nine tightly packed train-car loads to remove the stolen artwork.

Parkhurst said the men did the best they could with little outside help.  “We were charged with much more than we could encompass. We had no trucks, no jeeps,  nothing but our shoes.  And no support of any kind from officialdom.” Their jobs were further hampered by the conditions in Germany after the war from Allied bombing – telephones that didn’t work, roads that were destroyed, cars that were breaking down.

The Monuments Men had to decide which artwork should go back to museums and which belonged in private collections. With mountains of stolen property piling up at Allied collecting points through Europe, they had to focus on returning the most famous and valuable works.  Critics say that strategy left out 90% of what was stolen. The Allies were there to clean up the mess as well as to rehabilitate and help the Germans put themselves back together culturally.  They relied on local experts and didn’t have the resources to settle disputes of who owned what.  They quickly organized exhibits and reopened museums and in some cases, mistakes were made.

In one-high profile case, more than 1,000 valuable pieces of art by Picasso, Matisse, Chagall and others were discovered in 2012 in a Munich apartment owned by Cornelius Gurlitt.  He claimed his father, Hildebrand, acquired the works legally, but Hildebrand Gurlitt was an art dealer known to have collaborated with the Nazis. Records show many of the works had been seized by Allied forces, but were later returned to him without proof of ownership.  This is unfortunately not the only example of the Monuments Men letting stolen works slip through their fingers.

Historians say these mistakes shouldn’t tarnish the rest of what the Monuments Men accomplished. Without their Herculean efforts under extremely adverse conditions, some of the world’s most important works of art would have been lost forever.  The effort to return major works of art to their rightful owners is something that had never been done after a war and it helped to earn the trust of the German people.

The five surviving members of the Monuments Men are happy Hollywood has taken notice of their efforts.  Last December, Washington took notice as well when bipartisan legislation was introduced to award the Congressional Gold Medal to The Monuments Men.  How rare and wonderful it is to have Congress agree on something!