What does this have to do with art?  I just learned from Janelle’s Facebook post that the Arts used to be part of the Olympics. It was the dream of International Olympic Committee founder Pierre de Coubertin to "marry the aesthetic with the athletic."  He felt that "an internationally-focused revival of the ancient Olympics would provide an intellectual and moral compass to citizens of a rapidly industrializing world."

Between 1912 and 1948, amateur artists could win gold, silver or bronze in any of five different categories:  architecture, painting, sculpture, literature and music.  Entries had to have some sort of sporting theme and were judged by an international jury.

Never heard of this?  Neither had I.  It’s probably because few artists of note ever competed. Just as professional athletes were barred from competing at that time, neither were professional artists allowed to submit their works. Very little is known about the winners from those years because there was little thought to documentation of the awards.  The best documented Arts Olympics were the 1936 Summer Games in Berlin. The vast majority (29 out of 41) of the members of the jury were fro 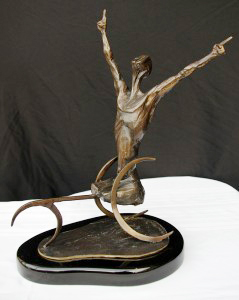 m Germany, so it’s not surprising that the Germans won most of the awards. The same thing happened in the US in 1932 – the jury was dominated by the Americans, so most of the medal-winners were American.

Some say the Arts Olympics died out because of the difficulty in getting quality entries due to the prohibition of professional artists competing and the difficulty in determining who exactly was a professional.  Beginning in 1948, the Arts were no longer a part of the Olympics, but were held as a parallel festival at the site of the Summer and Winter games. The winners received money instead of medals.

The Cultural Olympiad, which is hardly publicized, exists today.  The 2012 winner was sculptor, Martin Linson, for his entry "Omnipotent Triumph" (shown here) that pays tribute to the Paralympic athlete.

As someone who was always picked last to be a part of any team sport, I think this is wonderful.

Here are links to related articles: